For years we've been trying to find the right situation to compare the TAP Fins by Conrad Marine to manufacturer lifting strakes. Our biggest challenge? Finding two identical pontoon boats with identical engines so these two performance options could truly be tested, compared and evaluated.

Thanks to Evan Davis, the owner of Boat Club of Lake Norman in North Carolina, we finally found the right testing situation. The Boat Club offers a wide variety of boats to its members so that that the cost of ownership, maintenance and storage is taken out of the equation. Members reserve a boat and then simply show up and enjoy a hassle-free day of boating every time. And because of the popularity of pontoon boats on Lake Norman, Evan decided to add two 2010 Sweetwater 2386 pontoon boats to his fleet this past summer, both rigged with Yamaha 115hp four-strokes.

The only difference in the nearly identical pontoon boats - one has TAP Fins and the other has lifting strakes.

Next we wanted to see if there was a difference in the 0-20 mph time between the lifting strakes and the TAP Fins. We did the full throttle test from idle to 20 mile per hour three times going in one direction and three times in the opposite direction and then averaged the times. The blue Sweetwater with lifting strakes had an average 0-20 mph time of 9.72 seconds, while the tan Sweetwater with TAP Fins had more than a second quicker time of 8.05 seconds. This was the most dramatic difference between all the tests that we conducted on this day.

"The boat is fast. For a dual tube pontoon with a 115hp motor, it's faster than I expected," said Evan. "The cornering is tight and flat and the ride is super quiet because there is no spray deflecting up onto the subfloor."

Wide Open All that was left now was to put the throttle down and see which boat went faster. We kept the Magnone family onboard for each testing phase so everything would be as accurate as possible. At the cruising RPM of 3000, both pontoons were near the 9.5 mph mark, but it was the top speed where we noticed the real difference. The blue lifting strake version reached 6100 RPMs at a top speed of 23.5 miles per hour. The tan TAP fin Sweetwater topped out at 5800 RPMs, reaching a full mile and a half faster at 25.0 mph. Success After a solid round of testing, the TAP Fins out-performed the lifting strakes in all the different phases of our test. So the final question to ask would be the difference in cost. "Personally if I ordered another boat it would probably come down to price," says evan. "For performance and handling I really like the tan boat with TAP Fins on it. It would be interesting to see what it would be like with Fins on the inside and the outside. From an economic standpoint the TAP Fins would be the way to go because I believe they are less expensive than strakes."

"We have the exact same options and configurations between these boats that are nearly identical," explained Evan when he first contacted PDB magazine. "The only other difference in that one is blue and the other is tan. I'd be very interested to see how the boats perform head-to-head."

And just like that we were finally in business. The boats are launched and retrieved at the Ramsey Creek Park in Cornelius on Lake Norman and that's where we met to conduct our test.

Evans was as anxious as we were to see which performance option improved the most and that made our job a lot easier. He had already lowered both bimini tops, topped off the gas in the boats and installed brand new propellers by the time we arrived. He wanted everything to be as far as possible for our evaluation.

These boats were identical in almost every way possible, but we were a little disappointed to find out that the blue Sweetwater has lifting strakes on the inside and outside of the pontoons, while the tan version only has TAP Fins on the inside. Plus another advantage is the full aluminum underskin on the blue pontoon that is not on the other one. Still, we were working with two very similar pontoons for our test so we weren't about to complain. 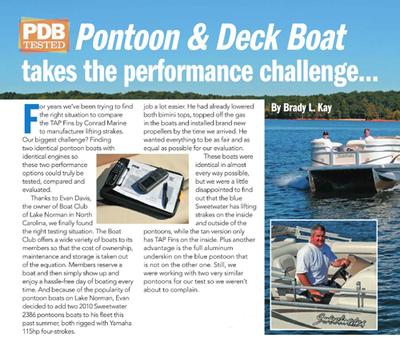 To make it more official, we recruited a local family that just happened to be near the dock when we first arrived. Dave and Charline Magnone along with their daughter had never been on a pontoon boat before, which made our situation even better. Anytime you can introduce a young family to pontooning it's a good thing.

Both Sweetwater 2386 pontoons were powered with Yamaha 115 four-stroke with a 13.5 diameter prop and a 15 pitch. An obstacle course was set up and we had Evan drive both boats for consistency. We ran the course twice with each boat and then averaged the times. The blue Sweetwater with lifting strakes completed the course with an average time of 2:22, while the tan version with TAP Fins had an average time of 2:10. We did note that the TAP Fin boat turned a little sharper going to the right, which could have been the difference.

"I felt like the blue boat was faster for some reason," said Evan. "But as for cornering, I definitely noticed that the tan boat cornered a lot better. It was smoother running through the course where I felt the blue boat had to work harder."

Just for fun we decided to let Dave, who had had never been on a pontoon let alone driven one, take a turn behind the wheel. Unofficially we thought this might give us a better perspective on which performance option might be better for the novice driver. Turns out it didn't make that much difference. Dave was only three seconds faster in the blue pontoon versus the tan one.

"On the blue boat I thought it handled well. It bogged down in the turns, but that was probably my fault," said Dave after the test. "On the tan one I felt the accuracy in turning was better and it didn't rock as much when I turned. It was easier in effort and maybe a little flatter in the turns."

TAP fins and lifting strakes are also designed to lift pontoon boats out of the water and reduce drag.  Read this article comparing these 2 technologies and see how they do not provide to the results obtained when using the Pontoon Water Glide.