Even Better The Second Time

What is a Water Glide?

The Pontoon Water Glide is a fiberglass foam-filled planing hull that mounts under the center of a pontoon boat. It has 700 pounds of flotation built into it, which, along with the planing characteristics of the hull, lift the boat, greatly reducing the hull's drag in the water.

"The idea of a triple pontoon boat has become pretty common in the pontoon boat industry over the past five years , but what the Water Glide does that a standard third pontoon cannot do, is get the boat up on plane with less than 100 Horsepower," explains Dave. "Every day we see these high performance triple pontoon boats with 200hp engines screaming across the water, but what does that mean to a guy with a 24-foot boat and a 90hp motor? If you install a third pontoon on a boat like that you will gain stability and reduce submarining. However, there will be no appreciable increase in the speed of the boat, a matter of fact. Unless you add planing fins and more horsepower you may lose speed." 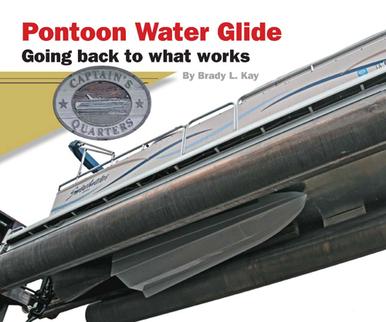 Going Back to What Works

doubts they might have. The 24-foot Sweetwater with a 90hp two-stroke gave them more room than what they had before, but it could only reach the 17 mph mark at full throttle. "We bought a 115hp Mercury Optimax and were doing 20 to 21 mph, but we knew we still needed to call Pontoon Water Glide," says Tony.

Reviews : Articles : Going Back to What Works

After adding the Pontoon Water Glide to their 24-foot Sweetwater, Tony and Lea found those same positive results they experienced with their first Glide.

"We added the Water Glide and went from around 20 mph to the 30 to 31 mph range," says Tony. "But really it does a better job with load and we get great gas mileage and more buoyancy now."

"The more people on board the better," adds Lea. "Even with seven people it runs well."

With the help of his friend Tim Carpentier, Tony installed the Water Glide and again raved on how easy the process really is.

"It's very easy to install, you just need basic tools with no specialty tools required," says Tony. "You give Dave your dimensions and waterline and he'll send you exactly what you need."

"It's fiberglass, just slide it under and attach it with stainless steel tappers," adds Tim. "It's easy if you have some intelligence. After reading the claims I didn't believe it at first, but the added buoyancy is great. It's the cheapest way to pick up 10 more miles per hour."

When Tony called he discovered Pontoon Water Glide was now under new ownership. The company was previously owned by the inventor Leroy Price and his daughter and son-in-law Donna and Trent Burkdoll, but they had sold their business since.

Dave and Ginger Schaefer purchased the company after finding success with the product themselves. The couple bought a 21-foot pontoon boat with a 115hp engine in the spring of 2009. With the new Water Glide it went from 22 mph to 32 mph and they decided it was a great product and wanted to promote it.

"In a nutshell, we liked the product so much we bought the company," says Dave with a smile.

When Tony purchased his second Pontoon Water Glide from the new owners, he noticed the product had been refined to promote ease of installation. It is now sold as a kit containing the Performance Sheeting to skin the underside of the boat and it includes all the stainless steel hardware required to install.

"Probably the most significant difference has been the development of a program that balances the boat and determines the exact location to mount the Water Glide for maximum performance," says Dave. "With the information that was gathered through the years of installing the Water Glides, the software program was developed to reduce installation time and maximize the boat's performance."

Years ago, Tony Sandoval and his wife, Lea, were tired of the kind of performance they were getting from their 22-foot pontoon with a 90 hp four-stroke engine on the back. The two 23-inch diameter pontoons just didn't give them enough flotation when it came to boating on the upper Mississippi River.

They came across the Pontoon Water Glide online and decided to give it a try. "On our first time out we noticed how well it took the wake, how it improved our gas mileage and we loved the increase in our top speed," recalls Tony. "But after a few years we were ready for a bigger pontoon".

The Sandovals went shopping, but they didn't look at any three pontoon models, but instead ended up finding a 2006 Sweetwater that they liked. And like their first pontoon, this one also had two 23-inch diameter pontoons, but they knew another call to the Pontoon Water Glide headquarters could fix any performance