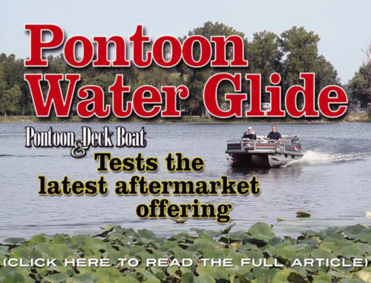 "Simply put, the Pontoon Water Glide did what they said it would."

A lot of satisfied customers took the time to let Trent and Donna Burkdoll know their product was a winner. I now felt confident that I could recommend this company to those who were looking to give a little boost to their pontoon, but I was still curious and wanted to see the results for myself. After all, one of its claims was that it could improved the speed of a pontoon boat by up to 47.9 percent. I know results will vary, depending on your boat, but that's quite a statement.

When the Burdolls found out I was interested in testing their Pontoon Water Glide, they boldly asked when and where. We agreed to meet at Lake Manawa in Iowa, a body of water that was unfamiliar to all of us. Luckily it turned out to be a beautiful lake that was ideal for our test.

We decided to use the 1989 Sun Tracker Bass Buggy for our test. This toon was 18-feet long and equipped with a Johnson 60hp engine. The Water Glide crew could hardly contain their excitement as we launched the pontoon into the water. Corky Price, the inventor of the Pontoon Water Glide, drove the boat and I went along to conduct the test.

Corky passed along the business to his daughter Donna and his son-in-law Trent to help take his idea to the next level. "Dad came to us and said he needed some help promoting the Glide," said Donna. "He was retired, so we took over the company, but he's still involved. When we get the tough questions we give dad a call."

We first took the pontoon for a spin without the Water Glide so we could get a feel for the boat. Corkey and I scooted across the lake as the two-logged pontoon reached a top speed of 18.2 miles per hour at full throttle. The boat seemed to do well, but Corkey just smiled. He knew that his boat was capable of much more. Then it was time to see what the Sun Tracker could do with the Pontoon Water Glide. We put the boat back on the trailer and the in the parking lot the crew installed the Glide. The Water Glide is constructed of high quality FRP composite material with Coast Guard approved flotation foam. This gives the pontoon an additional 684 pounds of floatation and your boat less drag.

This time when we splashed the boat there was a noticeable difference in the flotation that was even obvious from the dock. We retraced out same test path and this time we hit a top speed of 26.6 miles per hour, which is a 46 percent increase in speed. I couldn't believe the difference. The pontoon actually got up on plane and it almost felt like we were in a different boat.

When all was said and done, I felt it was important to add my name to the stack of testimonials. Simply put, the Pontoon Water Glide did what they said it would. Of course I'm not the only one who is impressed with this product.

"I got a fax that read, 'Pontoon Water Glide Rules The Waterways' in a big black headline and I got excited," stated Donna. "He gained 63 percent in speed, but that's a rarity." Added Corkey, "We've got gobs of success stories."

"I'd say 90 percent of the people doubt that it won't do what we say it will do." said Trent. "The best part is to go out with them after you put the Glide on and just sit across the seat from them and just watch their face. Boy, they'll start smiling."

There are many positives to the Water Glide besides the end results. The initial installation takes on the average around three hours. But the best part is that it can be taken off and put on a new boat if you ever decide to sell your pontoon. Another plus is the turnaround time. From the time you place your order to the time you receive your Glide takes about a week and a half on average.

"My favorite part is the friends that I make over the phone," said Donna. "You almost feel like the boat doctor and that excites me because I know we're going to be able to cure their problems. It's exciting to have the people then call back and tell me how much they love it."

There are a lot of aftermarket products in the boating industry right now, but the Pontoon Water Glide really caught our attention. Like a lot of people, we had our doubts at first if the Glide could really improve the performance of a pontoon boat. I contacted the Kansas-based manufacturer and requested some information to learn more about its product and not only did I get the explanation that I was looking for, but I also received a stack of testimonials.